As I look back over 2015, it seems like a bit of a blur. Definitely an odd year.

Last year at this time, I was looking forward to the release of my first new faerie novel. The Darkest Part of the Forest came out in January. I am incredibly grateful to everyone who picked up a copy and everyone who came out to see me on tour.

It hit the New York Times bestseller list, won the American Booksellers Association’s Indies Choice Book Award in YA, and reminded me how much I missed writing about faeries. 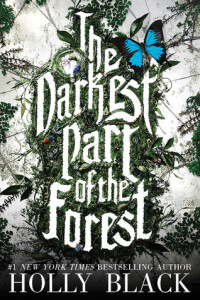 Me, with cosplayers in Vancouver dressed up as characters from my books, including Cassel, night/knight Hazel, and Val. I can’t remember if I posted this before, but I totally should have. 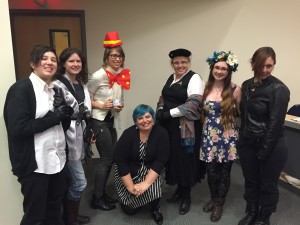 Then, I sold a new series to Alvina Ling at Little, Brown books, who’s published both The Coldest Girl in Coldtown and The Darkest Part of the Forest. After so many stand-alones, I am having fun hunkering down with a big cast of characters and an epic multi-book story. Okay, I am having some fun, which for me is a red letter event, because my drafting process is usually agonizingly painful and slow.

I am over halfway done with the first book — The Cruel Prince — so I should be able to give you a snippet from it:

The princess Elaine is dancing at the center of a circle of revelers. There’s a young human playing a fiddle — at least he looks young, although he may have been that young for a very long time. In Faerie, it’s sometimes hard to know, and Ivy says that not a lot of modern people play the fiddle. Two humans accompany him less skillfully, but more joyfully, on ukuleles.

Out of a pocket, Taryn brings a handkerchief, onto which she places a wedge of blue-veined cheese along with a bit of bread and a green apple. I break off a piece of the cheese and take out the little knife Madoc insists I fit into my shoe to cut up the apple.

Words drift up to me, shouted out by dozens of mouths, the beginning of a ballad, “Of all the sons King William had, Prince Jaimie was the worst,” they sing. “And what made the sorrow even greater, Prince Jamie was the first.”

Appropriately enough, Prince Cardan, sixth in line to the throne and the absolute worst, is striding across the floor beneath us. Valerian, Nicasia, and Bran — his three meanest, fanciest, and most loyal friends — follow him. The crowd parts and hushes as they pass. From here, I can see that Cardan is wearing his usual glower, accessorized with kohl under his eyes and a circlet of gold in his midnight hair. He has on a long black coat with a high jagged collar, the whole thing stitched with a pattern of constellations. Valerian and Nicasia are both in deep red. She’s wearing a diadem of rubies, each like a drop of frozen blood. A glittering cobweb net covers her hair. Bran brings up the rear, looking bored, his hair the color of fox fur.

“They’re ridiculous,” I say, but I cannot deny that they’re also beautiful. Fairy lords and ladies, just like in the songs. If we didn’t see them at the palace school, if I didn’t know first-hand what a scourge they were, I’d probably be as in love with them as everyone else.

“I’ve heard Cardan has a tail,” Taryn says and then giggles at her own daring.

All things subject to change, of course, but hopefully those paragraphs will persist to the final version.

This year, I did a bunch of traveling. I went to Monte Carlo and saw the famous casino. I even lost a hundred bucks there. 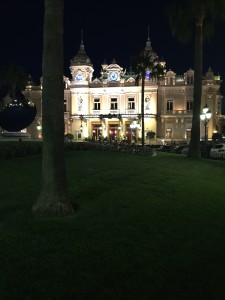 And I went to Australia, where I got to meet a lot of readers, swim in the sea, and hang out with kangaroos! 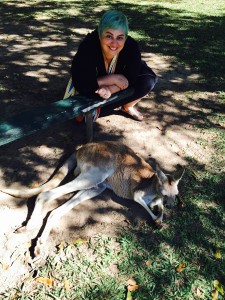 The second book of the Magisterium series, The Copper Gauntlet, came out. Cassie and I did a short US tour and got to see some of you. And we’ve been hard at work editing The Bronze Key. 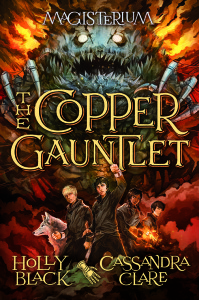 And I went to FaerieCon in Baltimore. It was great to see old friends and also buy some excellent faerie accessories. 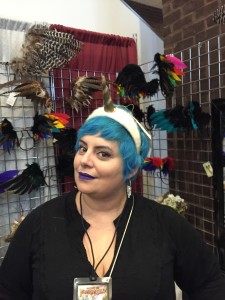 But my most recent news is that the first book in my new comic series, a reboot of the original Lucifer, just came out this month. I loved the character of Lucifer when he was written by Neil Gaiman and then again when he was written by Mike Carey, so it has been an honor to get to tell a little more of his story. 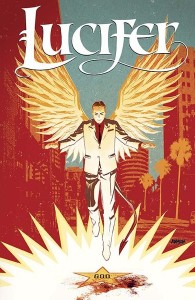 The beautiful illustrations that Lee Garbett is doing are a delight, not to mention the amazing covers by Dave Johnson. It’s really been a dream project. Not one without a learning curve and certainly intimidating, but I am so glad that I let myself accept the challenge of it. 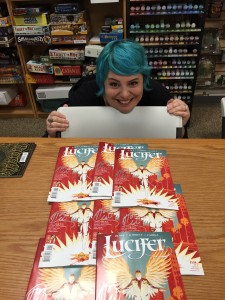 Personally, I am the mom of a toddler, who is talking and singing, truck obsessed (“Old MacDonald had a farm and on that farm he had a … steamroller!”), in love with lightsaber battles and messy painting and jumping on the couch. That’s been really, really, really great. The greatest, really. 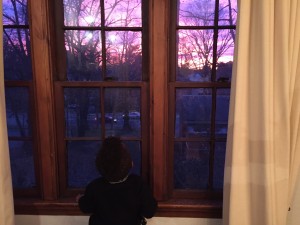 So, a pretty good year, right? In many ways, for me, it was, although I’ve been struggling with a lot of free-floating anxiety. Anxiety about big stuff — 2015 has been a rough, heartbreaking year for the world and for many people I care about — as well as other more personal, less clearly defined anxiety. I was really inspired by Gwenda Bond’s end-of-the-year roundup and how she made excellent anxiety-reducing changes in her own life. And I was inspired by Scalzi’s post about 2015 and how he’s managed to stop worrying so much.

I am prepping for a vampire-themed New Year’s party, so I leave you with this picture of my front door. 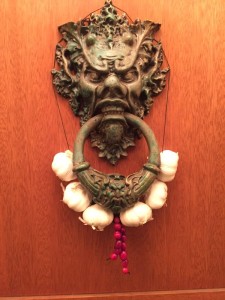