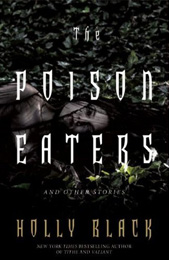 The Poison Eaters and Other Stories

In her debut collection, Holly Black returns to the world of Tithe in two darkly exquisite new tales. Then Black takes readers on a tour of a faerie market and introduces a girl poisonous to the touch and another who challenges the devil to a competitive eating match. Some of these  stories have been published in anthologies such as 21 Proms, The Faery Reel, and The Restless Dead, and many have been reprinted in many “Best of ” anthologies.

The Poison Eaters is Holly Black’s much-anticipated first collection, and her ability to stare into the void—and to find humanity and humor there—will speak to young adult and adult readers alike.

Black doesn’t strike a sour note in the bunch. Plus, the small, detailed pen and ink illustrations by Black’s hub Theo add a distinctly melancholic touch. So go ahead drink some Poison—it’s good for you!

‘The Land of Heart’s Desire’ shows Black doing what she does best, which an outlook that’s neither too fey nor too cynical, as young humans confront faerie in the big modern city. They’ll learn about each other and themselves, from the inside out.

I’m impressed by the freshness of Black’s treatment of old, worn conventions, for she uses her characters’ consciousness of the conventions to stretch and explore them rather than make light of them, and by the insightful emotional intelligence of her characterizations.

Black’s got all the supernatural bases covered: vampires, fairies, an elf, a unicorn, wolves, the devil, and a spell-wielding high school Latin club…. Although they are often centered on bleak, dark characters, the pieces inspire hope, are touching and delightful, and even turn the most ghoulish characters into feeling beings.

An elegant and eloquent collection of dark fantasy and fairy tales that epitomizes some of the best writing those forms have to offer.

Black (the Good Neighbors series) proves equally adept at urban fantasy and more traditional fairy tales, and her stories often feature the edgy sexuality and angst that have become her trademarks.